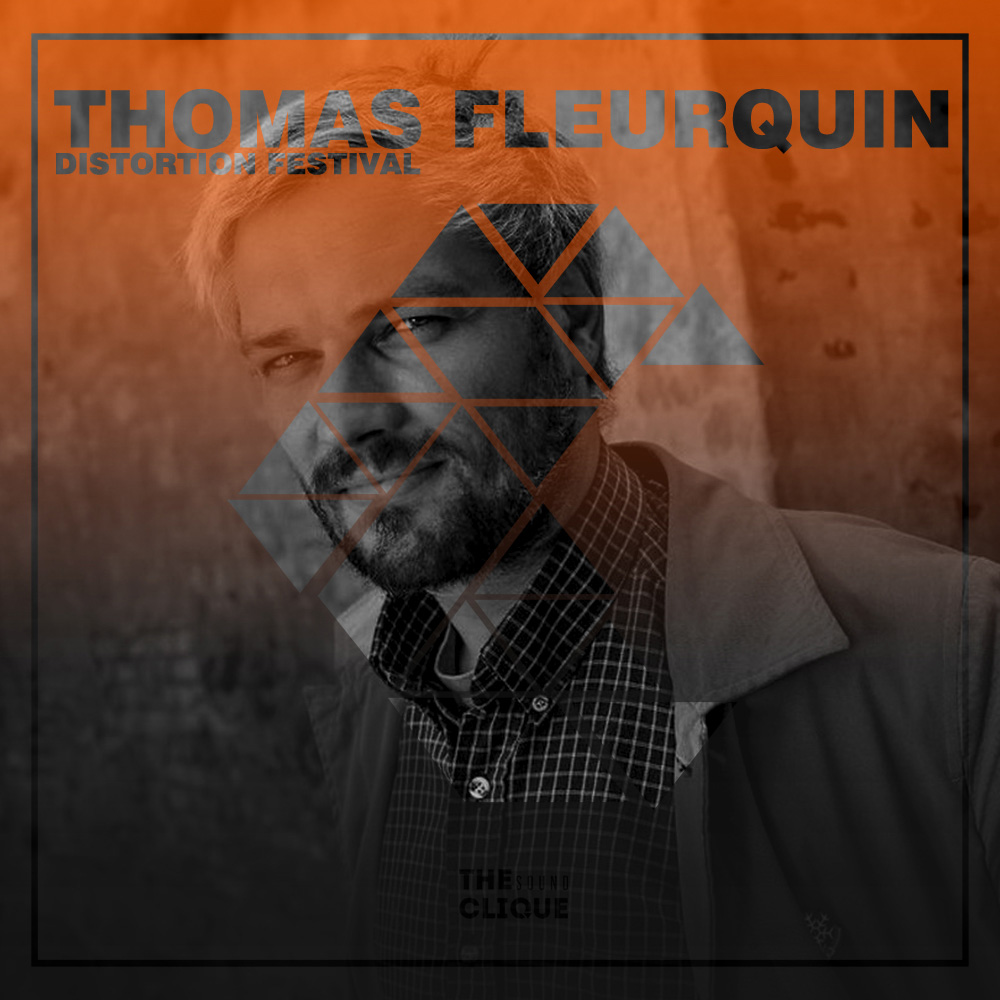 The philosophy behind Distortion’s street parties is arising directly from its founder – Thomas Fleurquin and his experiences as a young Parisian. It’s his thoughts on the ultimate open party liberated guest list and flip-area festival’s DNA. Combined with the father’s ‘do-it-yourself’ attitude that refuses to take no for an answer, even if the sender is sitting behind a bureaucracy controlled publicly desk.

“What you call anarchy is what we call magic. We are looking for the point where you lose your balance. We are constantly challenging ourselves, so we do not know what’s going to happen, and we seek to push the boundaries. It is creation itself, that is God. Creation. To gain a point where the atmosphere vibrates, and all thinking, what the fuck is going on here? Anarchy is perhaps really just freedom”. Thomas Fleurquin for Soundvenue Magazine.

In anticipation of Distortion Festival 2017 we had a sit-down with Thomas Fleurquin on how Distortion has changed his life, how it all started, and what it took to get to where the festival is at the moment.

Hello Thomas, and thank you for having us. Let’s kick things off with, what was your personal inspiration for starting Distortion Festival and what motivates you year after year to continue doing it? What are the festival’s core values to you?

The core motivation is to host an amazing party – and my best way to describe this would be:

The name “distortion” is originally a technical term about changing the shapes of images or sounds, but comes really from that vibration in the atmosphere at the climax of a party, where time and space stand still, where social context and individuality are gone. So, almost a religious experience!! Of course – the formula for this is quite complex: a good party must be both local AND universal, both professional AND impulsive, have artistic AND cultural values etc… I think the very core of the festival is probably “to break with the boundaries of daily life and to explore the balance between human and animal nature”.

In an interview to Soundvenue you say “Before Distortion had been more a local celebration that had a very naive and childish enthusiasm for the Danish club scene”. Over the last couple of years it has grown tremendously with over 100 000 visitors, attracting the attention of fans and some of the biggest brands, labels and clubs in Europe. Did you ever expect Distortion to become what it is today – one of the biggest festivals in the world and the biggest street festival in Europe.

Yes, because the plan has always been to put the entire city of Copenhagen upside down: that’s what we were going for, even when we were just 60 people in a bus or in a basement. But No, because like with any ambition or goal, it’s like crossing the desert: You don’t have enough water, probably not even enough water to get half way through the desert, but you just have to find ways to keep on going. It’s a constant leap of faith, year after year. Only since 2012-2013, there has been a faint light at the end of the tunnel. Before that, the idea that we could reach the point we are at today was simply “impossible”. 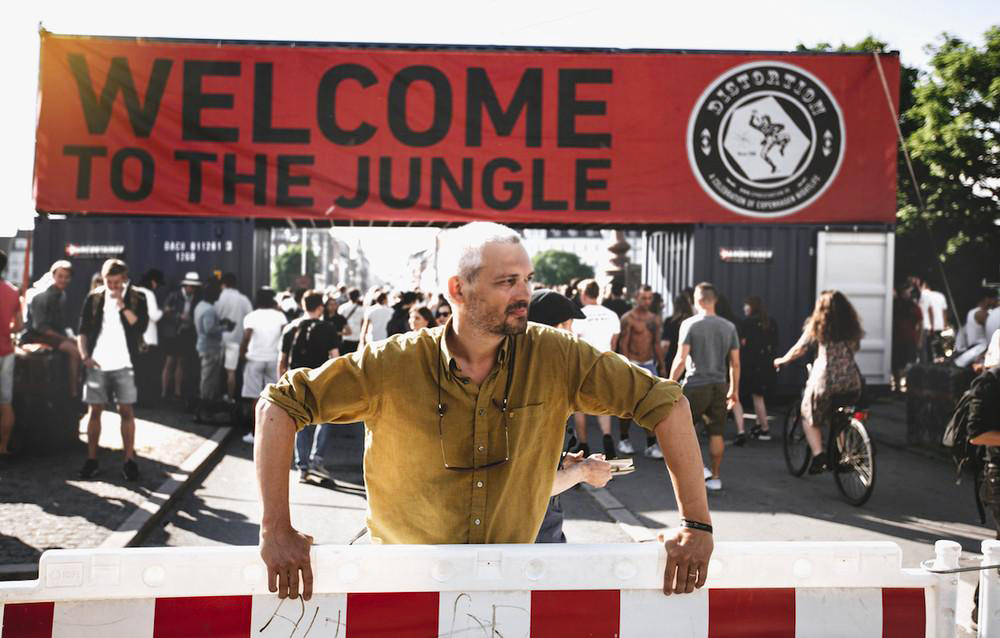 What kind of impact has Distortion Festival had on your life and how has it changed your life?

I spent 15 years of my life becoming the “Dancing Man” (the dancing figure at the centre of the distortion logo) – and it will take 15 more years now to shake myself out of the role. But that’s the way it should be: in the beginning everything relies on personal motivation, friendships, raw enthusiasm and almost brutal leadership – and then to survive in the long term, the project needs to be less personal, less brutal, more professionalised and develop its own identity. I am in that process now and this is my ultimate goal: to release the baby (the monster?) and to let it fly with its own wings. It has been hard on my wife and on my children, of course, because I was so dedicated to the project – but I am slowly moving away now.

To what extent would you agree that the Distortion Street parties and Distortion Ø are in a way two different worlds? The street parties are quite literally ‘orchestrated chaos’ which steers itself somehow, whilst Distortion Ø is like a hedonist island? How would you describe them and what do you think makes both of them unique in their own way?

I think your descriptions are very good… Yes, two very different events: the street parties are an “urban carnival” of local Copenhagen cultures while the Distortion Ø (Final Party island in the harbour) is a real music festival for the newest in dance music, with a much more universal or international level.

“To put it bluntly: Distortion Ø is for people, who are at least level 4 on the Party Animal Ladder.”

Dancing at 6 am in Refshaleøen to Dixon last year was definitely a moment I will never forget. The location is by far one of the best for outdoor events in Copenhagen. How did you come across it and chose it as the location for the Distortion Ø? And can we expect new decoration this year (in previous year’s Distortion has hanged gigantic disco balls, buses and more high up in the air).

Originally (like in year 2000) the idea was one neighbourhood per day. We had Nørrebro, Vesterbro, City etc … during the week and the area for the Final Party (which was only Saturday back then) was “the harbour” or “another planet”. So yes, the Refshaleøen island was the perfect harbour & deep space combo.

What is the sound of Distortion to you? Under what criteria do you curate the line-up of Distortion – the stages at street parties are traditionally more local vs Distortion Ø where the headliners are predominantly international artists?

About music: I am a son of techno from the early 90s. Then in the early 00’s I became German. I am still German, I guess, but I do not control the Distortion music profile anymore, it’s an open dialogue with the music team. Unfortunately for me, the club sound of today is hiphop. About street vs Distortion Ø: yes the streets are typically for local artists (music budget is zero) and Distortion Ø has an international profile. At Distortion Ø we also have 35-40% of the public, who are non-Danish.

How and why did you select some of the big names for this year’s festival such as Maceo Plex, Tale of Us, Max Cooper etc?

Deep below Copenhagen, in a deep, dark dungeon, at the end of a corridor, lies this massive ancient book called “the encyclopedia of house music & club culture in Copenhagen”. When you try to open it, you suddenly realise the book has legs, wears sunglasses and is called Waqar. He makes many of our big-room house music bookings, with the help of Guillaume – of whom I believe he is the finest music selector of my generation in Paris – and our head of music, Nis, who is the closest human embodiment I know of the term “suave punk”. I admire these guys unconditionally and we try to have a musical strategy but with a project like Distortion it goes in all directions and the end result is always some kind of organic evolution.

As a promoter, but also as long time raver, which festivals would you personally recommend to our readers? Festivals, which you see as ‘a must visit’ at least once in a lifetime and why?

Fusion for the vibe, Melt! for the lineup. I told you: I am German now.

Last year you also organized ’12 hour space hippie rave’ with Pachanga Boys in Pladeværkstedet, venue space in Refshaleøen close to where Distortion Ø is held in fact. Can we expect more events or even new concepts from Distortion in the future?

These type of just-for-fun events cost time and money. When we have enough, we will again.

Your top 3 most memorable Distortion moments?

I have 57, but right now without thinking I remember when we lifted a guy playing daft punk get lucky on a flute above Istedgade in a crane – absolutely crazy dada moment. I remember the first Sort Distortion on EnghavePlads, it was just so beautiful to see in which direction some local Copenhagen people were taking the Distortion street parties… and I remember the first time SuperMayer played the Final Party in 2009, in a small warehouse room capacity of 500-600, the ceiling was dripping and the rave was just so intense it felt like the entire universe was rocking with each beat….

“and I went up to Michael Mayer while he was playing and I made a ‘So-So’ sign with my hand and he bursted out laughing.”

And lastly, Thomas Fleurquin, what is your message to all Distortion Festival goers this year?
Good morning.