TSC Behind The Scene | UNUM Festival 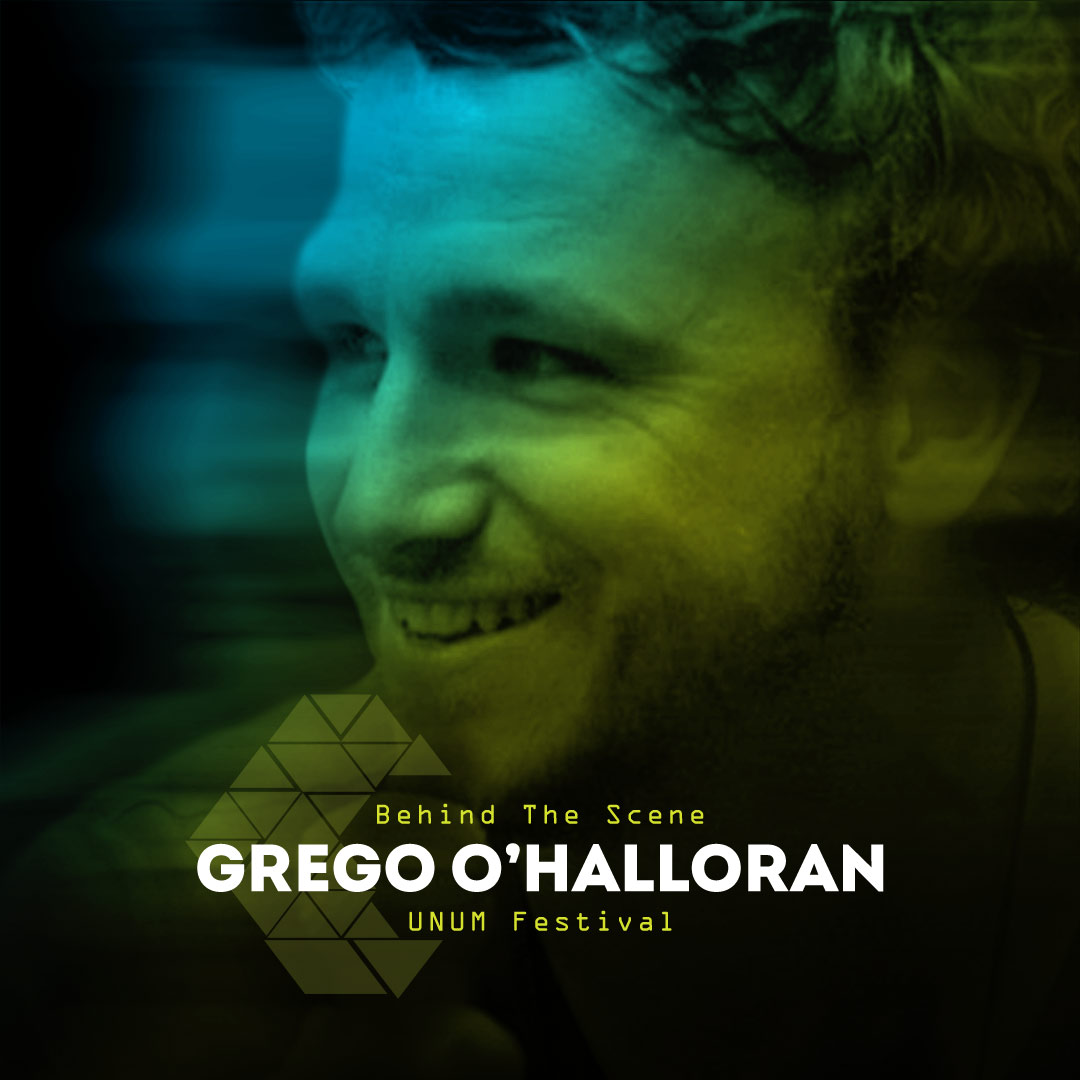 TSC Behind The Scene | UNUM Festival

UNUM Festival is Europe’s first official festival since the start of the pandemic in 2020- to be confirmed with a guarantee from the Albanian Ministries of Tourism, Environment and Health that it will go ahead this year from June 3rd-7th

Located in Shengjin Albania, the government has approved a Covid-19 rapid testing service for the events industry, the first of its kind and a HUGE win in support for music and arts culture.

UNUM Festival is set to boast headliners such as Sven Väth, Ben Klock, Mathew Jonson, Dana Ruh, Tobi Neumann and a plethora of local + international artists. A variety of international clubs and promoters are also lining up as partners. Such as the cult Romanian techno festival Sunwaves, Berlin’s Club Der Visionaere, plus the River Rhine’s floating nightclub Nordsten.

The idea of attending a festival right now seems like a pipe dream. So hearing talk of sun, beaches, bars and beats- is enough to make me start pinching myself. I had the opportunity to have a chat with UNUM’s director- Grego O’Halloran- a veteran in the event planning business, working with organisations such as Resident Advisor, Ibiza Spotlight, OpenLab, Circoloco and plenty more.

In my chat with Grego, I got to hear all the juicy details about what we can expect from UNUM Festival, his experiences in the industry and the principles surrounding big headliners and quality set times. 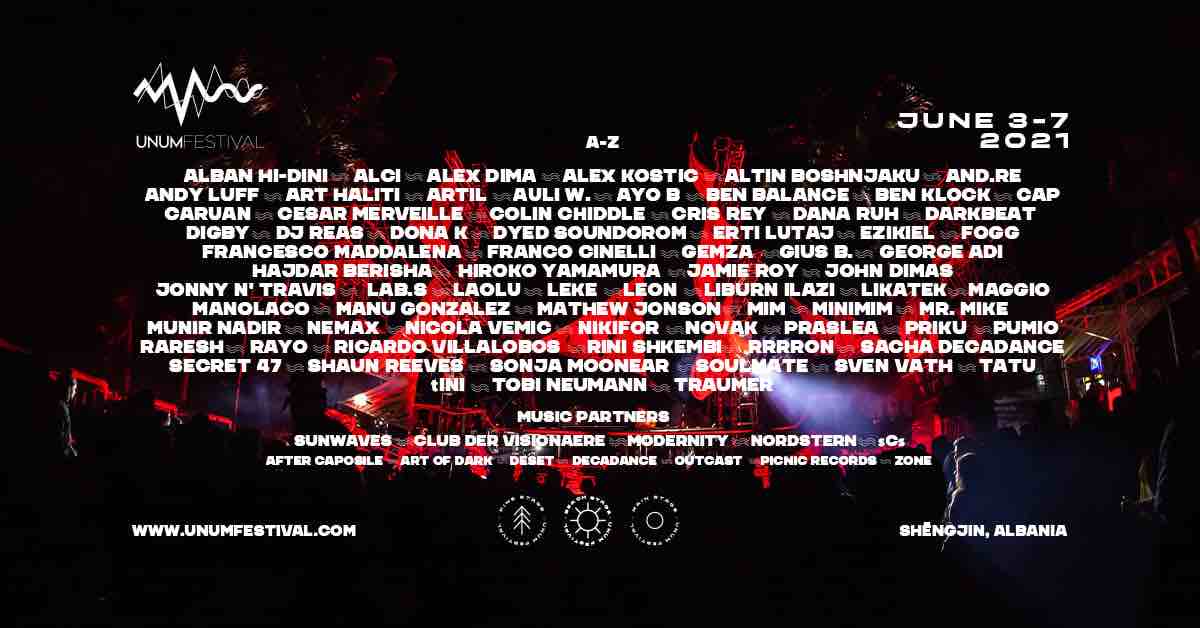 For starters I’d like to say welcome Grego and thank you for joining us!
I can only imagene the amount of blood, sweat and tears that has gone into organising this, what has been the biggest obstacle that’s kept you up at night?
Haha. Yeah, organising a festival is difficult at the best of times but launching one in a country like Albania in 2019, which is basically a new destination, not just for dance music, but for tourism in general, certainly caused a lot of obstacles. The main one I have to say is probably convincing 1000s of people to take a chance on us and come to Albania for our first edition in 2019 and also be part of this year’s festival despite the tumultuous last year we’ve had.

Have you received much support from your previous patrons? And while I’d hate to imagine it, have you gotten much backlash due to the fact you’re directing a festival during a global pandemic?
We’ve been supported massively from all sides and primarily from the government, who have sanctioned the festival going ahead in the first place. Without this, we wouldn’t have considered going ahead. The same way in the UK this summer, the government has green lighted events, and so those events are in full preparation, well the Albania government approved ours and so we are going ahead.

What is about UNUM festival that you think makes it stand out compared to other European festivals? Is there something in particular that you think your revellers are going to love?
Well, the most obvious thing is the location because the scene in Albania couldn’t be more virgin at this moment,

so the experience is new for almost everyone and there is a magical feeling when that occurs, when you’re part of something new and fresh.

This also transmits to the energy of the festival, because unlike a lot of others, there are very few restrictions at UNUM Festival. There are no time constraints, the festival runs non-stop and the music can be as loud as we want. Add in the idyllic location on the beach, amongst the pines and set against the backdrop of the mountains, you have the perfect melting pot.

What’s the method behind “rapid Covid-19 testing” and how secure is it? I mean brutally honestly, has anyone taken into account that a nose swab is going to be a pretty hostile environment among ravers?
The rapid testing protocols used will be approved by the government’s Department of Health and implemented in a practical and safe way to ensure we check and double check attendees, staff and artists. The rapid tests used have extremely high specificity and the process is quick and simple and a small inconvenience for anyone coming, in order that they’re able to enjoy the festival.

If a festival did otherwise, then they might not exist at all, so it’s a definite balance between being able to put the event on in the first place and creating something artistically interesting and musically on point.

The shorter set times are a byproduct of this model in many ways, because there simply isn’t enough time to fit all artists on the bill, but removing artists to rectify this, is likely to lead to reduced sales.

At UNUM for example, our sound concept is very clearly defined for the Pine Stage, where Ricardo Villalobos plays.

Now with the pandemic and so many organisers going bust, do you think that trend is over? And organisers will focus more on cheaper, less known artists?
I definitely think there will be an inevitable change towards smaller events, which will probably be concept based or destination based, rather than just simply a particular artist.

The paradigm was already shifting in this regard before the pandemic, which means there will be a natural cull of the status quo and allow for a regeneration in terms of music and trends.

Are you cooking up any other projects for us to look forward to?
Always!! I’m currently working on several other festival concepts in Albania with globally renowned brands, so as to develop the market there. You can expect the first of them in 2022. Also in 2022, I’m launching a festival in South America and another in Europe. I’ll be announcing both of them later in the year.

I’m also looking forward to developing Swallow Events, a UK company that runs operations and logistics for the events industry, as the pandemic unravels and things begin to open up again.

You have a pretty extensive career in the electronic music industry, was there a defining moment for you growing up that steered you in that direction?
I suppose it really does all come back to Ibiza for me. I went there aged 17 and pretty much didn’t leave, other than a brief period when I started a family. The island totally changed my life and my outlook on the future; it showed me what I wanted and I knew very quickly that it would be the epicentre of my existence. If I had to pin point one specific thing, then it would definitely be the old Space Terrace on Sundays. Best club experience ever!!

What has the been the most cherished moment of your career so far?
Staying with Ibiza, I had the pleasure to work at DC10 for over 13 years and was involved in everything going on during that time. I was also simultaneously involved in running Cream at Amnesia, which meant I was in the envious position of promoting two globally renowned events that sold out each week and at two of the best and most famous clubs in the world. It doesn’t get better that!

What’s something about raving and music festivals, that you think should be left behind when we return to the dance floor?
Moaning/bitching about everything. The price of a ticket, the size of a queue, the weather, which DJ did what, how it was better back in the day. If you don’t like it, get off the dance floor, there are plenty of others who are having the time of their lives.

If you could organise a festival, where anything you said goes- what would it look like and who would be your first choice of headliners?
Well, in some ways I’ve already done it and it’s UNUM, with a real care-free atmosphere, something new and rare, beautiful location, cheap drinks and artists like Ricardo Villalobos, Raresh, Dyed, Ben Klock, Sven Väth.

Get your tickets for Unum Festival

Has it been a struggle choosing artists for the festival?
It’s been a little bit challenging to get the right balance musically and also because we’ve been one of the only confirmed events going ahead, we’ve been approached by all the agents and managers trying to get their act booked. But really, we carried forward a lot of artists from the first edition, the ones who have been with us since day one, as it worked and we want to continue that vibe. We had to work hard to get the right headliners because that’s a critical part of course, but in the end having the likes of Ricardo, Sven Väth, Ben Klock, etc is perfect.

One aspect that is a struggle is making sure we find the right balance with local artists also performing at the festival because we have aimed to have a true spread and representation of the region, but with focus on Albania of course. We’re happy with what we’ve managed to put together.

Are there any artists that you feel have been underrated, that you’re keen to shine a light on and give a platform too?
Too many to mention but I definitely want to highlight the Swiss connection, artists like DJ Reas, and Laolu, as well as Ezikiel too.

So picture we’re at UNUM right now, where do we find you and what is your festival staple that you can’t live without?
More than likely I’ll be somewhere near the door making sure everything is going smoothly or running to another place on site to resolve a problem!! Definitely rapidly typing away on one phone and speaking to someone else on another, probably in desperate need of a vodka red bull!!

The whole event sounds like an absolute utopia, I don’t have a doubt in my mind that UNUM Festival is set to be a fantastic event- and that your patrons are going to be overwhelmed with the result. I’d like to say huge thanks for chatting with me Grego, it’s been a pleasure! I can’t wait to see it all develop and support the event in all ways possible. It truly has been a feat for live music and art culture that UNUM Festival has fought so hard to go ahead.

Can’t wait to meet you on site and cheers to the success!
You’re welcome. Look forward to meeting you!

Get your tickets for Unum Festival