TSC Behind The Decks | Adana Twins 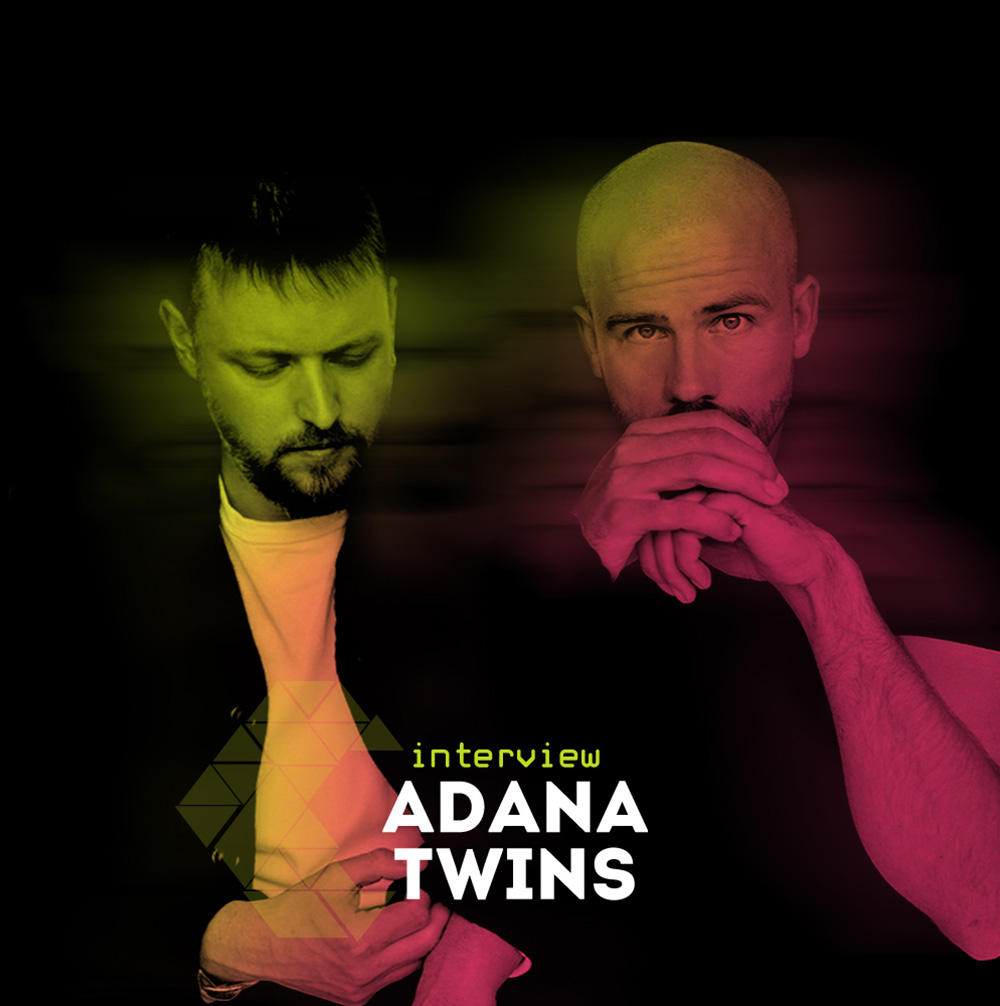 TSC Behind The Decks | Adana Twins

Since their big break in 2012 Adana Twins have established a sterling reputation, refining their sound constantly and pushing the boundaries of their musical ambition and evolving organically with the passage of time. They have been working together for well over 13 years now, starting back in 2006. Merging Benjamin’s love of hip-hop and Friso’s love for club music Adana Twins have produced a series of critically-acclaimed tracks and releases on world-renowned electronic music labels such as Diynamic, Watergate, Tronic, Exploited, Saved Records and others, to name a few.

Over the last few years Adana Twins have found that their penchant for deep, dark, emotionally-charged music has fueled the evolution of their sound, from the house-inspired productions into a more nuanced, techno-influenced vibe. Both men grew up with techno, hailing from Hamburg where the sound was so prevalent, it is part of their DNA and, as they have matured as artists, so too has their sound and outlook on life itself.

As they’ve made the transition into the world of emotive techno, Adana Twins have also been channeling their love for electronic music into cultivating their own platform, TAU. Their label marks a milestone in their musical lives, giving them the creative space to expand their sound while also discovering and nurturing new artists.

Adana Twins are coming to Copenhagen this summer, to play Distortion Festival 2019 and will be closing the main stage with a 3 hour set – at Distortion Ø.

Hello Adana Twins and many thanks for having me for this interview. Where am I catching you guys and what are you up to?
We’re flying back to Hamburg from Stockholm right now, before we continue to Munich, Innsbruck and London this weekend.

Wow, you guys surely are keeping busy with that travel schedule! Let’s turn the clock back. Can you still remember the moment you fell in love with electronic music and DJing, and was there a defining moment, that made up your mind about it? Fast-forward to today, what is the single thing you love the most about electronic music?
It was quite early for me. I was around 10 years old and heard the older boys in the streets listen to stuff like KLF and Technotronic. That was kind of the moment I discovered electronic music for myself. There was also a Techno and House radio show in my region back then, which I always recorded on a cassette. I put my favourite track on a new tape over and over so I could listen to it a few times in a row. Electronic Music changed my listening habits massively at that time. Those new sounds partially touched me intensely.

Daft Punk’s album “Homework” was kind of a game changer for me, probably like for many others. I think that was around 1997. The album involved so many different styles from a Poppy Funk to a rough Technoid sound. I think that still shapes the way I listen to and produce music.

Electronic music is a large field and I love frolicing around on it 🙂 After being a music consumer and dancer for years I’ve also started djing. It started more unexpected than actually planned. The first time I perceived myself as a DJ was as soon as we had a weekly session in a bar in St. Pauli, Hamburg. First only our friends came regularly, but eventually more and more people started to come, and they came for the music.

You are both hailing from Hamburg and are raised with club music. How influential was electronic music in the local music scene when you were growing up, and what impact did it have on you individually + shaping your sound as Adana Twins? What other genres and notable artists have influenced you?
At the time when I started listening to electronic music, I was kind of an outsider in my close environment. I remember so many discussions about Techno not counting to music, but only be “bum bum”. I think this distinction bound me even more to electronic music. I couldn’t even understand how anyone couldn’t have these intense feelings to this music, sounds and noises. Especially when you experienced them in a club with many others. Particularly during my puberty when I started to go to clubs I of course tried to massively absorb everything that was new. Also the new acts of the first hour like Yellow impressed and shaped me a lot. Almost everything builds on one another and develops further. Often quite similar, but then also with new facets.

Since your big break in 2012 your sound has continuously evolved from house-grounded to more techno-inspired, deep, dark and emotional vibes. Where would you say you are in your musical journey at the moment, and how do you see your sound continuing to evolve in the years to come?
It’s interesting, you develop as an artist and human continually and repeatedly try to test something new. You often don’t even recognise the changes over the years as this mostly emerges out of a process you’re only a part of.

Someone from Stockholm just told us that he used to play some of our 7 to 8 years old disco house stuff in a smaller bar, and the kids Shazamed it and said that these boys are doing Techno, that’s not correct.

For us it’s always a journey and research. Of course everything builds on the stuff you’re used to – what is actually new? Certainly there are also cycles which repeat themselves and after a Techno phase comes a softer Funky one and so on. But sometimes everything changes all at once too, something new is added or a new facet from something old delights and inspires. The beautiful thing about music is that it shows so many aspects of our lives. It brings us together, but sometimes also helps to separate ourselves.

As producers we wish we could try out every music genre someday. The more possibilities you create the higher the chance that you bump into something new, at least for yourself. Even when it’s only one song. There is so much you can learn, for example how drums can change the rhythm during the breakbeat, how the snare works in Funk, or how a vocal from a Techno track makes a Housey one…

At the moment we would say that we try to create a mixture of Funky and Technoid rhythms or maybe melodic sounds in our sets. But that sounds way too theoretical and it changes from set to set. That’s why we still like to play all night long sets in some selected clubs. It takes a lot of preparation, but also brings the most fun often and helps us with our productions, because you can serve a wide range of styles. The great thing is that we just don’t know where we’re going musically in the future. It keeps being a constant journey.

Speaking of your own record label – TAU, can you share what releases you have coming up for 2019?
Next up is a bit darker EP from Ede called “Kosmos EP”. He has just begun producing, but has already released on Innervisions and Correspondant. After that, another EP is coming from a quite unknown artist yet from Kiel in Germany. We think that he has a very special and a sound of his own. We’re always more than happy when demos surprise us so positively, as in these two cases.

Can you shed some light on what releases you as a group plan for the remainder of 2019?
“A Picture EP” from us is up next on Diynamic. The EP will have six tracks, which will all be very different again. From funky, groovy to a Techno banger and a collaboration with another newcomer. Moreover we’re currently working on a remix of a classic track from the early 90s, which we unfortunately can’t tell you more about just yet.

As label owners and producers, can you share a few names of upcoming DJs you think will make big waves in electronic music in the next few years?
They’re certainly no nonames anymore, but Innellea and Ede will become a talking point.

It’s your first time playing Distortion Festival in Copenhagen, a city not too far away from your hometown Hamburg. What do you know about Distortion and do you have any expectations? Your friend and colleague – Solomun headlined Distortion last year. Unless we know the festival (because we have played there before or have been there as guests), we try not to build up our expectations too much before the show. Of course, you can tell a little bit about a festival’s general direction by checking out the line-up and what friends are telling you. Based on that we believe it’s gonna be a lot of fun for everyone this year!!

The line-up for Distortion Festival 2019 is stellar, including the likes of KiNK, Kollektiv Turmstrasse, DJ Tennis, Hunee, Young Marco, I Hate Models, Dekmantel Soundsystem and many others. What can we expect from you (a lot of unreleased IDs)? And what do you want to tell the fans coming to see you at Distortion Festival 2019?
It always depends on which slot we’re playing, but we’ll play some of our new productions for sure and of course also new releases or demos for TAU.

What more can we expect from Adana Twins in 2019 (or maybe some teasers for 2020)?
We definitely have some surprises in store, most of them are still top secret though. We’re currently finalizing a release for one of our favourite labels and are working on some remixes too. Of course some more stuff on TAU from us is also in progress. Be surprised soon!

Thank you for the interview Adana Twins and see you at Distortion 2019!

Can’t wait to be there! See you on the dancefloor!