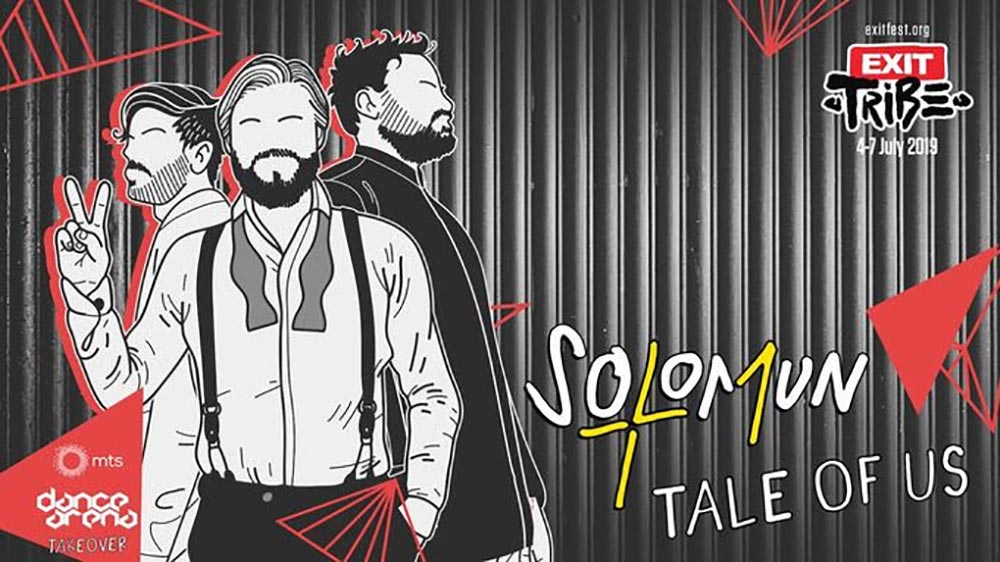 Solomun will bring his + 1 to EXIT Festival 2019 and its legendary Dance Arena, with Tale of Us.

The unique concept will takeover EXIT Fesival’s gigantic stage for six hours with Solomun and Tale of Us playing solo sets first, ending with a grand finale 2-hour b2b set, and all while the sun rises over the fortress walls making for a truly magical experience in this awe-inspiring natural amphitheatre.

After Carl Cox announced his return to one of the planet’s greatest open-air raves, he was quickly joined by Paul Kalkbrenner, Amelie Lens, Maceo Plex, Jeff Mills, Charlotte de Witte, Boris Brejcha, Peggy Gou, Dax J, Monika Kruse, Adriatique, Satori, Johannes Brecht and many others. This “galactic” team of the greatest electronic stars of today will be completed by none other than Solomun, an EXIT regular since 2010 who brings his famous “+1” party format that conquered Ibiza! He will bring the spirit of the White Isle to the colossal 18th century fortress with his special guests, the leading techno and house scene duo of today – Tale of Us! Special and original in their format, the “Solomun +1” parties in the famous Pacha club are considered the most talked about on Ibiza, the global hotspot for clubbing. Their unique concept will takeover EXIT’s gigantic stage for six hours, presenting Solomun and Tale of Us in their solo sets first and ending with a grand finale 2-hour b2b set!

Apart from locations such as Miami, New York, Paris, Tulum and of course, Ibiza, this exclusive map will include Novi Sad this year as well, as the home of EXIT festival, which Solomun once called as “one of the best experiences in his career”! His planetary rise happened, among other places, at EXIT Festival as far as 2010, when he played in the early morning hours which are exactly the ones he shines at the most! His unbreakable bond with EXIT was confirmed last year as well, when he “delivered” a very inspired set to the Arena. This confirmed his status as one of EXIT’s contemporary resident DJs, for which the audience gave him roaring ovations, enticing him to extend his set overtime.