One of Ibiza’s most iconic and oldest clubs Pacha returns for 2018 with All Night Long sets from Solomun, Sven Vath, Dixon and other

One of Ibiza’s most iconic and oldest clubs Pacha returns for 2018 with All Night Long sets from Solomun, Sven Vath, Dixon and other

Pacha Ibiza is back with 6 opening parties over 3 weekends featuring headliners: Hot Since 82, Sven Väth, Seth Troxler, Dixon, Fatboy Slim and Solomun each All Night Long. 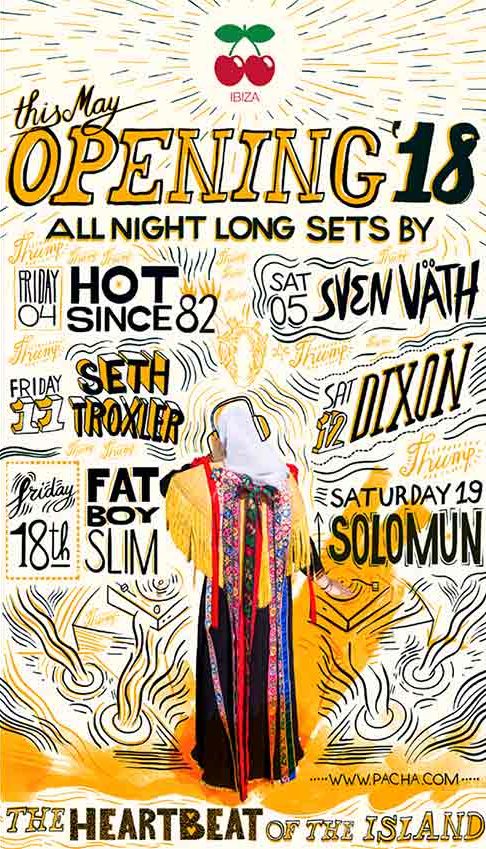 In 1973 Pacha landed in Ibiza during the much documented hippie movement- a small Ibizan finca located on the outskirts of the island’s original urban core and capital Ibiza Town. From a converted farmhouse to super club, Pacha humbly began life as the disco that soon became Ibiza’s most recognised and iconic club – a true dance music mecca and beacon of global bohemia.

Since the original boom of dance music in the mid 1980’s and transformation of the island into the ultimate clubbing destination it is known for today – Pacha’s brand has evolved immensely and embraced longevity with unrelenting passion. While the iconic red cherries can be seen around the world through hotels, restaurants and even its own record label, it is undoubtedly at its finest in its spiritual home of Ibiza.

Closing for the first time in decades this past winter to remodel, Pacha will pull down the curtain and reopen its doors on Friday May 4th. After months of suspense, a total of 6 opening parties are to be held during the first 3 weekends of May under the concept: All night long featuring headliners: Hot Since 82, Sven Väth, Seth Troxler, Dixon, Fatboy Slim and Solomun.

Pacha Ibiza’s redesign seeks to capture the excitement and experience between clubber and DJ; modifications including bringing the DJ booth to the dance-floor, simple in practice yet monumental in feel. The architect Capella commented that

“centering the cabin is the most natural way for the public and DJ to feel the greatest connection.”

Pacha opens Friday, May 4th with Hot Since 82 all night long.

For more news from the White Isle connect with us on Facebook.