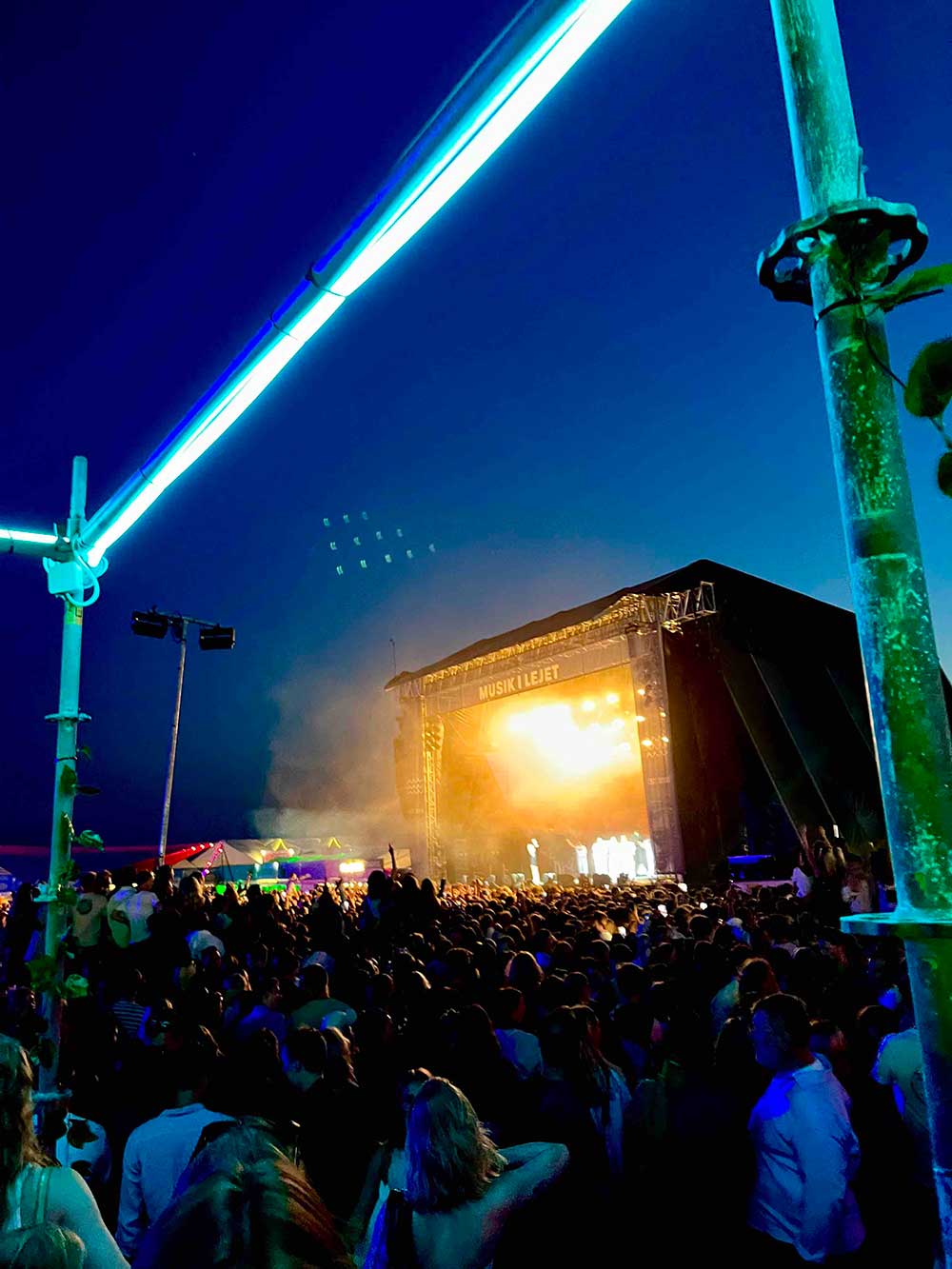 The Sound Clique went to the small fishing village of Tisvildeleje, to examine the electronic elements at this year’s festival.

Musik I Lejet is a strange festival. It takes a little more than 1:30 hour to get to Musik I Lejet by train from Copenhagen Central Station, something one could fear would damage the festival’s possibilities to attract especially the metropolitans of Copenhagen. A crowd which already got festivals such as Distortion, Karrusel, and Strøm during the summer.

Whether it is because the festival for some already begins with a cold beer during the train ride, the beautiful surroundings close to the beach of Tisvildeleje, or because of the music line up, Musik I Lejet don’t have any problems getting the citizens of Copenhagen out of their city: It’s one of the most popular festivals in Denmark, and each year when the tickets are put on sale, they get sold out in a few minutes.

Even though the festival’s music profile is mainly focusing on the mainstream, it has an unique ability to always make some distinctive bookings when it comes to the electronic scene. In 2019 it was Disclosure (GBR) and before that, the festival has have had bigger electronic bookings such as Hayden James (AUS) in 2018, WhoMadeWho (DNK) in 2017, Kasper Bjørke (DNK) in 2016, and the list goes on.

This year, the music line up concerning the electronic scene had shrunken, with a focus on mainly Danish artist. Even so Musik I Lejet had once again made two interesting bookings: Julius Sylvest and Bless you.

We started our festival at a private White Party. With a mix of The Blaze and popular Danish top100 hits, one of the guests very brief, but precise, summarised the atmosphere at the festival, when asked how she was during:” It’s summer, I’m drunk, and we are at Musik I Lejet”. 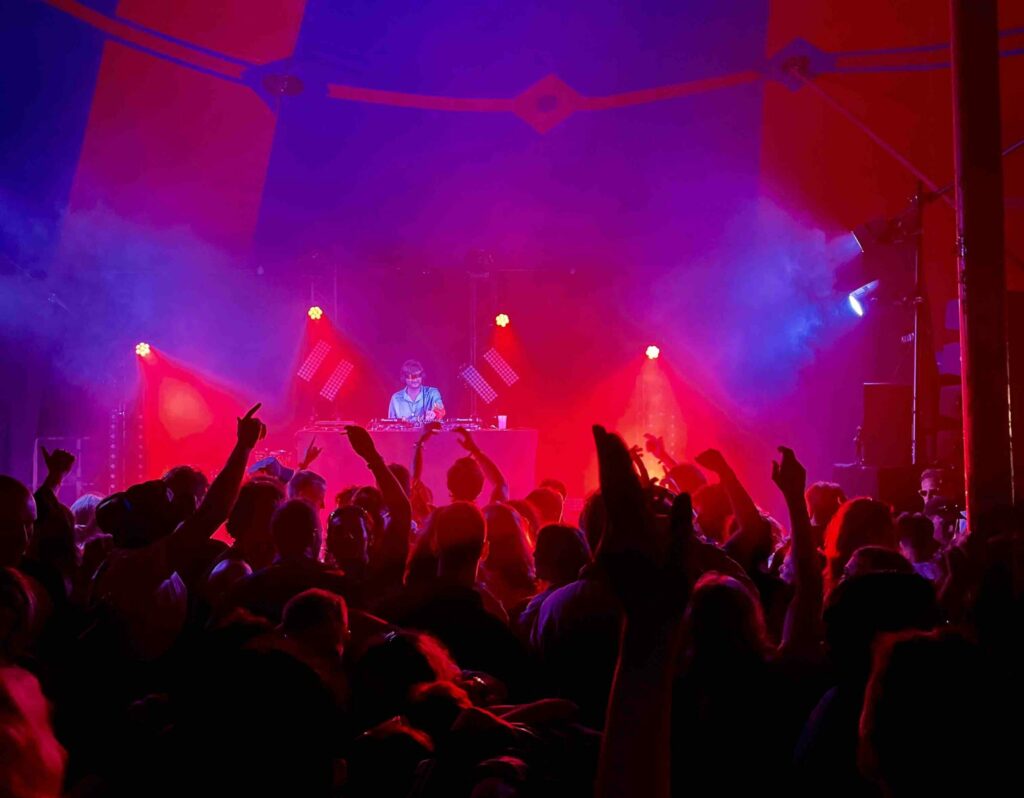 With that in mind, we went to the actual festival. Here we sat down with Julius Sylvest for a talk about what makes Musik I Lejet as a festival, and his expectations before his performance later that evening.

What does it mean for you to play Musik I Lejet 2022?
I think it is fantastic because it gives me the opportunity to showcase once again what I stand for with my music. It gives at sort of salvation, to make and see the audience dance and take in the music. It creates a sort of energy field.

What is your earlier experience with the festival, as a guest and artist?
It’s my 4th time playing Musik I Lejet since it started back in 2009. To be honest, nothing much has changed since I played here my first time, and that’s a good thing. I like the fact that you can walk around the whole festival in just 5 minutes. If I should point out a change, it would be that the light setup has really improved, which adds an extra element to the performances.

What are your expectations to the crowd, due to the rest of the line up being mainly mainstream music? Does that affect your track selection, or how do you handle situations like this?
It doesn’t really affect my track selection. For me it means a lot to see how people take in my music and give themselves away to the party. I expect hands in the air and people on the floor.

Which track do you look most forward to play, and why?
I have many tracks which I look forward to play, but especially some of the music I have done with the Indian DJ and producer Nucleya.

Comforted by Julius energy, we once again went out in the buzzing festival.

Here we could conclude the following: The location of the festival is second to none. Lying out to the sea, Musik I Lejet gets a special calm energy. Maybe that was the reason why everybody was behaving so extraordinary polite wherever we went. We didn’t experience any pushing or angry faces, when people from time to time had little space to navigate with. The last things showed to be very important later that night, when both Julius Sylvest and Bless You played their DJ-sets in fully packed tents.

From the Bodega-stage, Julius Sylvest raised the energy with his signature mix of tribal drums accompanied by electronic elements. As foreseen in the interview earlier, Julius Sylvest’s performance did exactly what he had intended: Made people dance. Not just to the melodies they knew, but also to the once they should learn to know. More important, the performance showed that the audience at Musik I Lejet want to be challenged in their taste of music and – that the can dance.

At the same time Bless You blew off the roof at Skovscenen where they served a mix of heavy clubbangers, taking us from Tisvildeleje, to the clubs of inner Copenhagen, around Ibiza, and ending in Tulum. A well-orchestrated performance, where you from time to time could be in doubt whether you were at a festival or a club, but at this point at the night, it didn’t make any difference for the crowd.

With the beats still pumping in our system, we concluded that even though the electronic lineup had shrunken this year, the performances had not. We look forward to next year, and hope that Musik I Lejet will begin making some of the interesting international bookings, which before has made the festival a hidden gem for fans of electronic music, hidden by the beach of Tisvildeleje.